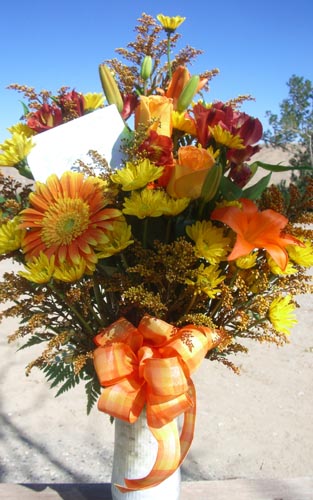 Kindergarten… Amber and gold colored bits of paper floating away on the wind… Guilty glances as I destroyed the evidence… My earliest memory of a boy professing his love for me happened in Kindergarten. Kindergarten translates into “children’s garden” or “garden of children.”  The word was coined by German educator Friedrich Frobel as a metaphorical place where children could develop or grow much like a plant in a garden.

We had just been let out of class for recess, and I was headed alone to the playground. A little boy from my class shoved a Hallmark card into my hand before running away. I remember looking at him, and then looking down at the card feeling stunned. There was a floral bouquet of yellows and browns on the front, autumn colors. It was something my grandma would have picked, not something appealing to a five year old girl. I don’t remember the exact words scrawled inside, but I’m sure he said he liked me. Just outside the Exit door, the brick wall divided the day between sun and shadow. I was so embarrassed that I backed against the wall and hoped the shadow would consume my confusion and give me cover until I could dispose of my feelings.  I tore the card into tiny pieces behind my back, letting the debris blow away in the wind. I walked away and never said a word about the card. If Mr. Frobel had witnessed my prickly reaction that day, he would have classified me in the Plant Family Cactaceae – for Cactus.

I was caught off guard for the second time that day when my mom asked if I had received a card from the little boy at school. The bad thing about parents, or in this case the great thing about parents, is they often don’t truly listen or wait for answers. I never told her about the fate of the card. I just deflected by asking her how she knew. Apparently she and his mom were friends. She never asked to see the card or even what happened to it. She never asked how I felt about it or the little boy. I could tell she was excited that her little girl had an admirer. She loved attention and gifts from others. She was in her own head with her own feelings. She assumed I was as excited about it as she would be. Even then, I knew she would not have understood such a rude act. I did not want to see the disappointment on her face when I told her  that I ripped it up and left a pile of litter on the playground. I did not want her asking herself, What is wrong with my daughter? Is this my fault for leaving when she was so young?  Did I scar her with my absences? I felt ashamed for destroying a perfectly good card, for rejecting a perfectly nice boy, all without anyone but me even knowing I did it. I did it in a rash moment of trying to hide the evidence. Evidence of what? I did not know. I still do not know. I loved presents from my parents, especially on birthdays and holidays, but attention from a stranger was foreign. I had always been introverted, not to be confused with shy. I spoke up when it was necessary, but I operated in my own force field. To get inside, you had better be invited.

There was never any follow up from the little boy who gave me the card. The gesture died that day on the playground and was carried away on that ill wind. Apparently his interest ended with the transference of the card. Maybe he never really even liked me. Maybe his mom put him up to it. (Once my mom coaxed me into saying the neighbor girl was one of my best friends because her mom was my mom’s best friend.) The card did not endear me toward the little boy any more or any less. My embarrassment had nothing to do with the boy who had given it to me. In fact, I had never even thought about him. He was just a boy in my class.

Years later when we were seniors in high school, I remember watching the now grown up little boy aggressively make advances at my mom. She dutifully rejected his flirtations by reminding him he wasn’t even 18. He said he’d keep at it until he was old enough. Using his age as an excuse to reject him allowed her to continue receiving his attention while hiding behind society’s rules. Having a young, cool mother was not always the best mother to have in a small town. My classmates loved hanging out with her, but in high school, it was awkward to be the daughter. I knew it was only a matter of time before my mother’s suitors would start turning 18, and suddenly her boyfriends would be younger than me. I made friends two towns over and moved in with my grandma. There are some histories you just don’t want to share.

If I had the card today, I would examine it and try to decipher any hidden meaning. I would try to understand the rituals of childhood. I would dissect my own repulsion to his innocent gesture. I may never know what motivated my actions in the garden that day. Maybe I wasn’t ready to be seen or hadn’t yet been socialized to the rules of courtship. Honestly, the now grown up little boy probably doesn’t remember giving me the card, but I bet he remembers pursuing my mother. That piece of paper likely wasn’t a traumatizing and intriguing episode in his life.

I still have a complicated relationship with gifts today, but there are some that have brought me to my knees. They include a perfect moment preserved on a Post It Note, a few phrases wrapped in a Tibetan prayer scarf, dried roses that can never apologize enough, a tiny fabric elephant traveling in the pocket of a back pack, tears of parting meant to be preserved in a bottle… Today, I would simply love to hold that awkward card as a relic of my childhood, a primitive love letter. Not because it was my first love, but because it was a first declaration of love from someone outside of my family. Though I wish I could scratch what I witnessed between him and my mom from my eyes, I wouldn’t give up the sacred memory of holding and examining those confused feelings I had on the playground that day. They were my beautiful and strange feelings from which to learn and grow. I do not run from uncomfortable or foreign feelings. The act of destroying the card only created a space for me to cultivate the feelings, to collect and listen and build.

It was the first of many days I would be reminded that I was a cactus in a showy field of sunflowers. Though I loved looking at the bright beautiful suns all around me, I knew my blooms wouldn’t always be on display. I was a small, sturdy little cactus who was excited to see how many and what color my blooms would be, who might only push out pale flowers for a couple of hours under the moonlight or wear a crown of purple flowers lasting little more than a day where no one would see, but they would be born of my constant care. And I would stand Witness.  And that is Holy.