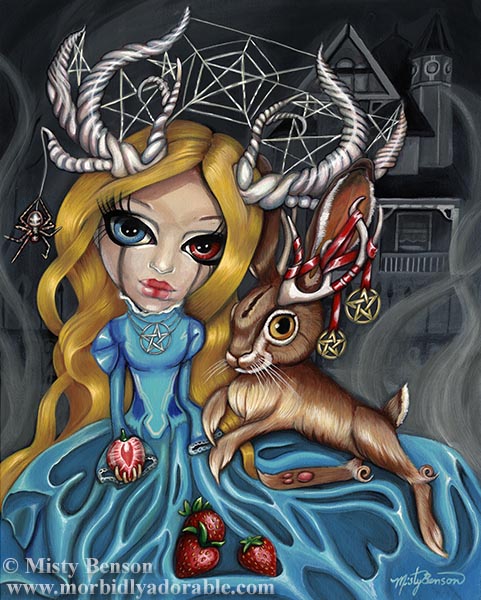 Originally debuted to my Patreon audience on March 6, the 10 of Pentacles makes its first appearance here on OctopusHeart.com. To see new cards when they are first debuted anywhere, join me on Patreon! (For members of my Patreon Spectral Parade, you may see the newest card the 10 of Wands which was debuted this week!

A big eye girl with hair the color of spun gold wears a luxurious blue dress. A spider is busy spinning pentacles in her opalescent antlers. She holds a strawberry in her hand while a few fall onto her dress. Her jackalope companion keeps her company as their large home looms in the background.

The Ten of Pentacles is the prosperity or material wealth card. You have created, earned, or inherited something lasting. Maybe you paid off your home or had a financial windfall. However it manifested, you are financially secure.

Ten pentacles are scattered throughout the painting with seven spun from spider silk in the girl’s antlers, two hang from the jackalope’s antlers, and the last one is in the form of jewelry around the big eye girl’s neck.

There are ten pentacles in this image. If you look closely, seven of them are spun into the big eye girl’s antlers. In some cultures, spiders are auspicious and attract wealth.  The webbing of the spider represents your hard work coming to fruition.

On a practical level, they keep your home free from other pests. When I think of spiders, they tend to build their webs on things that are stationary. Since this is the card of manifestation, the spider finds stability and builds a home.

I’m very fond of heterochromia, or when a person has two different eye colors. I’m sure it is extremely rare to find someone with a blue and a red eye! Symbolically, someone with two different colored eyes may be considered a Witch (which I don’t think is a bad thing! If you’re using the Tarot, you are open to divination.) In Native American culture, the ghost dog looks to Heaven with its blue eye and Earth with its brown eye.

Strawberries are an offering to the sprits in exchange for continued abundance.

Personal Mythology of the Jackalope

Do you have an animal, totem, or something that continues to show up in your life?